During the 18th century, Alain Marie de Kergorlay had two sons, Louis Gabriel and Florian, father of the founding branch of Kergorlay in Picardy.

Towards the end of the Terror as the young couple roamed Europe, the Marquis de Faudoas, Eleonore de Faudoas (sister of Justine) and probably an aunt, were arrested at Canisy and guillotined in Paris a few days later. 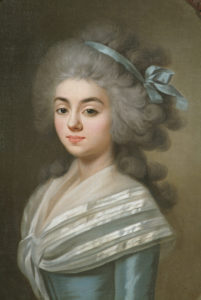 One of Louis Gabriel de Kergorlay’ sons, Hervé, took over the castle in 1830 and was at the origin of what it is today. He devoted his whole life to the beautification of the castle and his domain.